Home » Fentanyl Side Effects: What Every Parent Should Know
For the Family & Loved Ones

Fentanyl Side Effects: What Every Parent Should Know

Fentanyl Side Effects: What Every Parent Should Know

Are you worried about the fentanyl side effects?

If you are reading this article, you most likely know the dangers of fentanyl. I ask that you share this article or other information about fentanyl with a family member, especially with teens or young adults, so that parents are more informed.

The sad fact is that fentanyl’s side effects kill our teens and young adults.

I find it heartbreaking when I hear about young people in the prime of their life whose lives are over because they made a deadly mistake.

Did you know that fentanyl poisoning is the leading cause of death for ages 18 to 45? It is more deadly than COVID, car accidents, or suicide.

Kids today are supposed to learn from their mistakes, not die from them. ~ Derek Maltz,

Fentanyl side effects include:

According to NIDA, “An overdose occurs when a drug produces serious adverse effects and life-threatening symptoms. When people overdose on fentanyl, their breathing can slow or stop. This can decrease the amount of oxygen that reaches the brain; a condition called hypoxia. Hypoxia can lead to a coma and permanent brain damage, and even death.”

One example is Alexandra Capelouto, a 20-year-old college student who unknowingly purchased a counterfeit Oxycodone pill deceptively sold to her by a drug dealer on Snapchat.

Another is Eli Weinstock, who lost his life due to an accidental fentanyl overdose. You can listen to my interview with Dr. Beth Weinstock, Eli’s mother.

A recent study suggests that collectively, family and friends will mourn more than a million years due to all the young people’s lives lost to overdose deaths in the last several years.

According to the report published in JAMA Pediatrics, researchers at The Ohio State University found adolescents and teenagers, ages 10 to 19, cumulatively lost nearly 200,000 years of life due to unintentional drug overdoses from 2015 to 2019. When they expanded the study to 10- to 24-year-olds, it grew to more than collectively 1.25 million years lost. 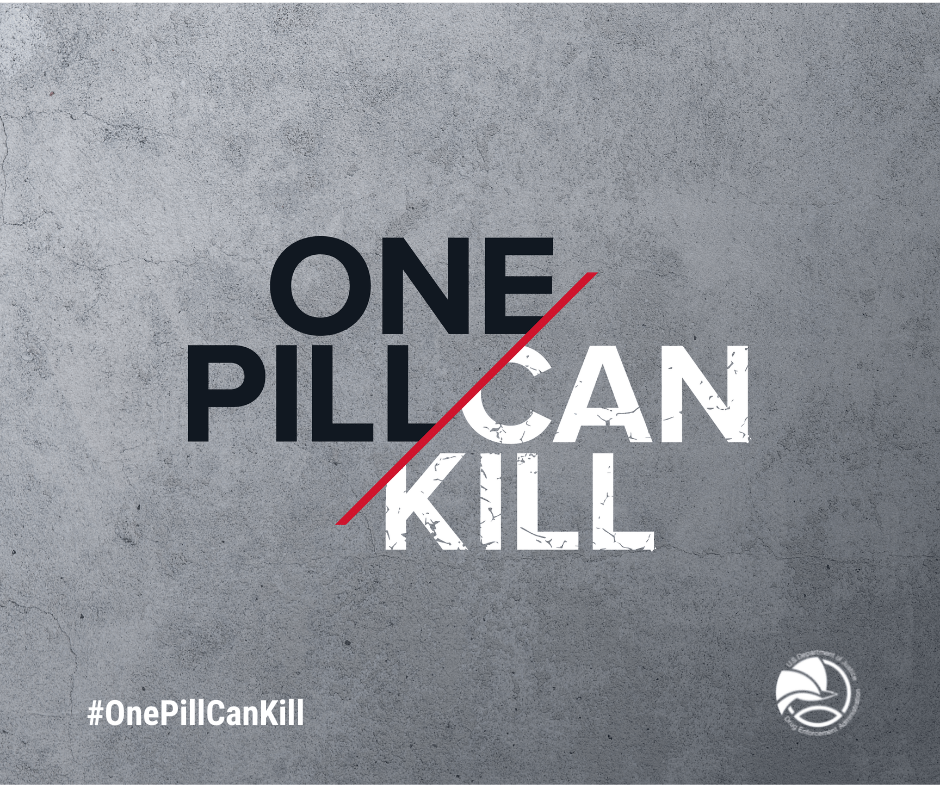 The DEA has a new campaign. One pill can kill.

Here’s what you should know to protect your kids.

Fentanyl is a Schedule II narcotic under the United States Controlled Substances Act of 1970. From 2012 through 2018, the number of drug overdose deaths involving fentanyl and other synthetic opioids increased each year dramatically.

Fentanyl is a drug that people inject, snort/sniff, smoke, take orally by pill or tablet, and spike onto blotter paper.

Overdose may result in:

Information about fentanyl side effects

A recent episode of the Phil in the Blanks podcast addresses the national crisis of drugs, both real and counterfeit, laced with deadly doses of fentanyl. Derek Maltz, former director of DEA Special Operations, and Tim Mackey, CEO of S-3 Research, were the guests. As you probably know, fentanyl is sold on the streets and on social media. These substances are easily accessible to our teens and young adults.

According to Derek Maltz, here are some of the things the DEA and other law enforcement organizations are seeing:

They are seizing millions of counterfeit pills, and over 40% have a lethal dose of fentanyl in them.The DEA in Phoenix, Arizona seized zero fake pills in their cases of counterfeit pills. Last year the Phoenix DEA confiscated over 10 million counterfeit drugs. The DEA lab has determined that 40% of the analyzed pills have a potentially lethal dose of fentanyl.Fentanyl is 50 to 100 times stronger than morphine. It’s being mixed into various drugs. 40% of the drugs have lethal doses in them.On the border last year, DDP seized 11,201 pounds of fentanyl. That’s a 390% increase since 2018. The DEA, alone working with their partners, took over 20 million fake pills off the streets of America and 15,000 pounds of fentanyl.Enough fentanyl has been seized already to kill everyone in America as of December of 2021!The statistics are escalating. And it’s estimated that only about 10% of the total supply has been seized.In San Diego, at the end of last year, there was a 1300% increase in fentanyl-related deaths from 2016 through 2020. The sheriff’s department in Orange County reported a 1,067% increase in fentanyl-related deaths. The coroner in Franklin County, Ohio, said 86% of the deaths are fentanyl-related in the drug-related category, and that was only through the third quarter of 2020.

Related article: 20 Facts Everyone Should Know About Fentanyl

One of the main problems is that your son or daughter can purchase these pills on social media sites. There are attempts made to regulate them, but things are moving much too slowly.

Midway through 2021, 90 cases were reported of online drug cases, and 49 of those had a direct tie to fatalities.

Currently under investigation,Snapchat has thirty-four cases, and Facebook messenger has twenty-eight. These sites have been too slow to react to keep their users safe.

Unless the whole tech industry addresses this issue collectively, we’re really not going to address the problem at all. ” ~ Tim Mackey

We need a united force to address the problem to lower the death rate. Resources, people, and money need to be behind the problem. Whether your child is affected or not, we all need to be concerned about these issues killing our young people.

It’s about letting your kids know that buying drugs from a friend or an unknown source can quickly end their life.

Parents need to talk to their kids. Have ongoing conversations with your kids, even if you don’t think they are abusing drugs. You can’t take the risk of avoiding conversations about the dangers of fentanyl.

My challenge to you is to share this article or other information about the danger of fentanyl use with five other families who have teens or young adults. Please explain how it can be in any drug your child obtains. And it can be deadly.

Here’s an example of what you could say:

“I’m writing to share an article and to let you know about the dangers of fentanyl. Please have an ongoing conversation with your son or daughter to help keep them safe. Buying any pill or another drug from a friend or an unknown source could be deadly. Please share this article with other families who have teens or young adults. Thank you!”

Fentanyl has made its way into the United States and other countries and is killing our young people. Fentanyl poisoning is the leading cause of death for ages 18 to 45.

It is very likely to be any pill or street drug being sold today. While the social media companies are helping with the problem, the consensus is that they are not doing enough.

Finally, talk to your child often. Whether in middle school, high school, or college age, they need to understand fentanyl’s side effects clearly.

Help spread the word to help save lives. Do it today.

Thank you for reading. Don’t forget to sign up for the Sunday newsletter with information and inspiration to help parents and families.

All In Solutions Counseling Center is a network of alcohol and drug treatment providers. We offer outpatient & inpatient substance abuse treatment programs that are individualized to meet each client’s needs. Our specialized programs include:

Did you miss our previous article…
https://www.allinsolutions.com/how-craft-can-make-a-difference/