Addiction treatment isn’t a one-size-fits-all solution. Some treatments are considered best practice by researchers and clinicians through years of studies and successful applications, but that doesn’t mean traditional modalities are the right fit for every client.

Art therapy is a clinically proven alternative method of treatment often used in combination with more traditional treatments like cognitive behavioral therapy (CBT). Its applications are proving even more diverse with each study.

What is Art Therapy?

According to the American Art Therapy Association, art therapy has a wide range of applications, including: 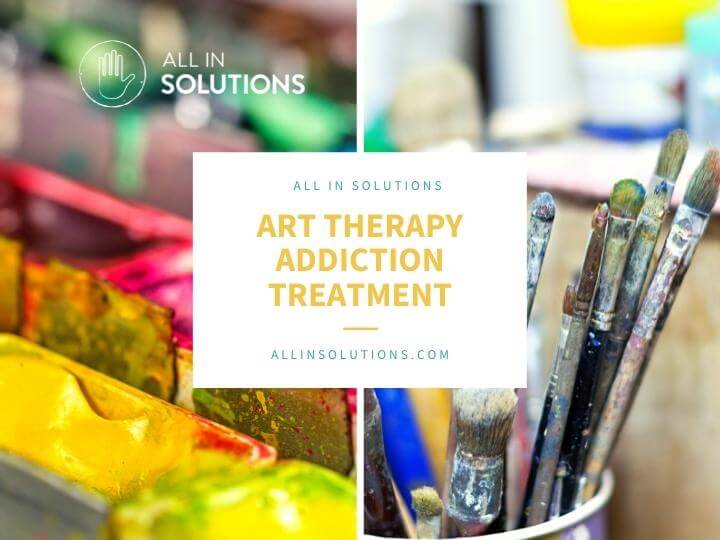 Creating art, even alone, has been shown to relieve stress, aid communication, and promote brain health to reduce cognitive decline. Harvard Health wrote on the benefits of creative activities that drawing and painting enable people with dementia to reconnect with the world by stimulating memories, while also improving memory, reasoning, and resilience in older people.

Art has been proven repeatedly to benefit people with language limitations and the neurodivergent, including people with autism, but it has also helped make significant improvements in those with depression and anxiety.

In one review on the benefits of art therapy for emotional regulation, the authors state the difficulty of treating depression and anxiety with traditional therapy because sufferers often feel overwhelmed by their thoughts and feelings. They go on to say that depression and anxiety can result in feelings of helplessness and frustration, and as art therapy is a mind/body approach, working with resistive mediums like clay can alleviate this sense of helplessness by forcing them to use physical strength and energy to express themselves, in a way, showing them that they can confront and resolve their issues by their own strength.

This inability to cope with strong thoughts and emotions is the trademark of many mental health conditions that lead the suffering to use substances to numb painful sensations. Consequently, relieving helplessness and giving a voice to undefinable emotions is one of art therapy’s most applicable benefits.

Those suffering from Post Traumatic Stress Disorder and Trauma, in general, are frequent beneficiaries of art therapy. As trauma is often a non-verbal affliction, rooted in images, sensations, and memories, art therapy has helped clients to contextualize and process painful memories in an intimate, yet safely distanced way in order to address and resolve trauma.

It’s clear to see that creative expression is an effective way to relieve the symptoms of many disorders, connect a person to themselves and their surroundings, and process difficult sensations and memories, so why not use art therapy for addiction treatment?

How Does Art Therapy Fit Into Addiction Treatment?

Not every person who starts an abusive relationship with drugs or alcohol does it to cope with an existing problem, but statistics show a high likelihood that triggering emotions as a result of mental health issues is a very likely connection.

These triggers that initially prompted a person to use drugs or alcohol eventually reinforce them to continue using them. Situations, places, and activities a person associates with substance use become their own triggers. This is supported in Albert Bandura’s, “A Sociocognitive Analysis of Substance Abuse: An Agentic Perspective.”

In addition to stating the helpless, cyclical nature of addiction through these self-created triggers, Bandura also suggests that a person’s perceived self-efficacy plays a massive role in the likelihood of staying sober after a period of abstinence from substance abuse.

Art therapy claims to be able to improve a person’s sense of control, self-esteem, self-awareness, and emotional resilience. If all of this is true, then art therapy should be effective in treating the causes of addiction at its root.

According to this same review, because of the nature of expression through art, this sort of therapy called Complementary and Alternative Medical Practices (CAM) appeals to women, especially victims of sexual assault, adolescents, or anyone to whom art appeals or who has trouble expressing themselves verbally. Some other alternative treatments that fall under the umbrella of CAM include equestrian therapy, adventure/nature therapy, music therapy, and play therapy.

CAM is on the rise in addiction treatment for good reason. Trauma, physical triggers, and indescribable emotions are serious, subconscious reinforcers of maladaptive coping mechanisms like addiction. Art therapy and other CAM treatments are great at making connections between these unspoken and unspeakable triggers and feelings in a safe and cathartic way.

Your future is an empty canvas. What will you create?

Some of the purported and possible benefits of art therapy in addiction treatment have already been stated, but art rehabilitation therapy is coming to the forefront of conventional treatment because of the support it has received in the community and the support it has provided to those who suffer from addiction.

In one case study of a man who was dependent on cocaine, methamphetamine, and marijuana, the author stated one of the most outstanding benefits to his art therapy treatment as the client’s increased self-efficacy. The process of collaborating with the client rather than attempting to control them created a positive therapeutic relationship that lowered the client’s defensiveness and gave them more of a sense of control over their own life.

Another study, testing the effectiveness of art therapy on three women over three two-hour-long sessions also showed that creating addiction art and art that depicted their struggles increased motivation, self-awareness, self-efficacy, and independence. One of the women stated that her drug use used to be a way to suppress her aggravation and stress. Painting, in particular, helped her to accept these emotions and deal with them in a healthy way.

Finally, another study in which its participants shared five common themes of substance abuse including an inability to tolerate negative emotions, unhealthy family dynamics, trauma, maladaptive thought processes, and cultural issues found one of the most significant benefits to be increased tolerance to negative emotions. As participants were able to more comfortably connect with emotional material through substance abuse art therapy activities and more freeform artwork, they were able to feel their triggering emotions and remember difficult circumstances at a safe distance. This distance is what helped them to process more effectively and come to understand themselves and their actions better.

Clinically significant studies on Art Therapy are much more abundant than what can be listed here, but for each individual in these studies, art therapy proved an effective way to decrease the negative effects of their primary mental health conditions, made them more amenable to therapy, and helped to eliminate some root causes for addiction.

There is still much to be done as far as widening the availability of art therapy and testing its limits and benefits, but for now, it’s clear that this form of alternative treatment can be a safe, innovative way to help those in recovery to treat root issues and feel relief from their most painful emotions and memories.

If you or a loved one are struggling with addiction, All In Solutions is here to help. Our addiction treatment programs combine evidence-based therapy techniques with alternative treatment methods like art therapy that help clients who may struggle to verbalize their issues express themselves and rebuild their self-reliance and self-esteem.

A better life starts with a phone call, reach out today!